Zurabishvili congratulates the Head of the Cuacasus Muslim Division

Zurabishvili congratulates the Head of the Cuacasus Muslim Division 16 November, 2019  18:31 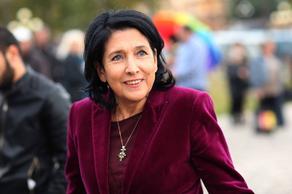 The letter of the President of Georgia speaks about the special role of Sheikh-ul-Islam Allah Shukur Pasha Zadeh in strengthening the faith in his country.

“Georgians and Azerbaijanis are nations of different religions, but despite their different beliefs, close friendships bind us together.

I always see the personal role of you and the Catholicos-Patriarch of Georgia in maintaining and strengthening this relationship.

I believe that this friendship will never fade away, we will take care of it and thereby strengthen the region, for which peace and development is vitally important,” reads the congratulatory message from President of Georgia Salome Zourabichvili.

The press service of the President of Georgia reports.