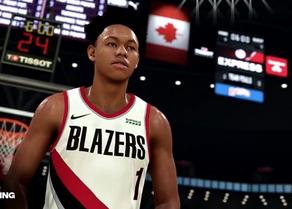 The best "dunker" of the National Basketball Association will be "Portland" basketball player Anfernee Simons for the next year.

Simons received 46 points from the referees in the first round of the dunk contest. In the second round, he earned 49 points, reaching a total of 95 points.

Simons rival Indian Cassius Stanley scored 44 points in the first round, 37 points in the second round, and had a total of 81 points.

New York player Obadiah Toppin earned 48 points in the first round. In the second round, he needed only 34 points to advance to the final. In the end, he got 46 points, and Obadiah Toppin and Anfernee Simons met in the final for the title of the best "dunker."

Cassius Stanley starting things off with a bang #ATTSlamDunk pic.twitter.com/hN8gpyjCq1