Another Georgian to play in NBA 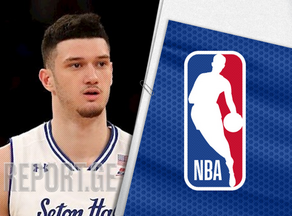 Sandro Mamukelashvili will play in the NBA. He was chosen by the Indiana Pacers in the draft but was exchanged for Milwaukee Bucks; this is where the Georgian basketball player will start his career. Mamukelashvili was chosen as the 24th number of the second round (54th in total).

Sandro is the 7th Georgian to be selected in the NBA Drafts.