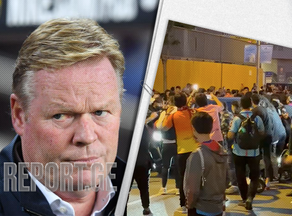 After the El Clásico was over, angry fans surrounded the coach's car, started punching it and shouting.

The club condemned the actions of its fans and issued an official statement regarding the incident.

"The club will take the necessary security and disciplinary measures to prevent disturbing incidents in the future," the club said in a statement.

In the match held yesterday, Real Madrid CF defeated FC Barcelona with a score of 2: 1 in El Clásico.