Bitadze to play in the NBA playoffs - VIDEO 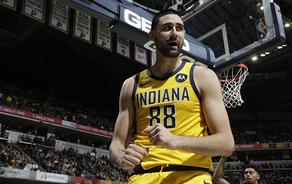 Goga Bitadze's team in the NBA, "Indiana Pacers," defeated the leader of the Eastern Conference "Philadelphia 76ers" and took place in the playoffs.

In the American Basketball League, Indiana moved from ninth to eighth place in the Eastern Conference.

It should be noted that the Georgian basketball player played 18 minutes in the match. He scored 4 points, two rebounds, one assist, and two steals.