Georgia lined up to replace Japan in eight-team Autumn tournament 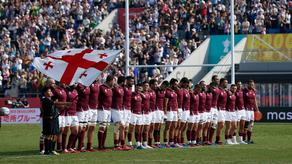 Georgia are being lined up to replace Japan as one of Scotland's opponents in an eight-team tournament this autumn.

The 2019 World Cup hosts were due to be in a group also featuring France and Italy, but are set to pull out because of coronavirus travel restrictions.

Scotland had pencilled in a warm-up match against the Georgians at Murrayfield on 24 October.

That could still go ahead, with a second meeting making up part of the eight nations tournament.

England, Wales, Ireland and Fiji will be in the other section, with the tournament scheduled to be staged on four consecutive weekends from 14 November to 5 December.

Each team face their equivalent in the other pool on the final weekend, with the venue for those games to be decided.

Scotland had agreed to face Japan in an autumn international before the coronavirus outbreak, but that Test match was to be folded into the new competition.

However, Japan's coaching staff have not been able to enter the country because of Covid-19 restrictions, hampering the side's preparations.