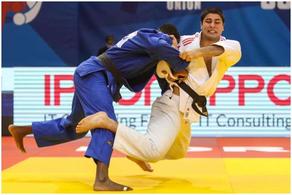 Georgian judoka Ilia Sulmanidze has defeated Turkish Mert Sismanlar in 100kg category and his French and Swiss rivals before the finals at the Junior European Judo Championship.

Saba Inaneishvili has claimed bronze in the same weight category after beating the Polish judoka.

The Georgian team of junior judokas has won gold, silver, and bronze medals at the Junior European Judo Championship.