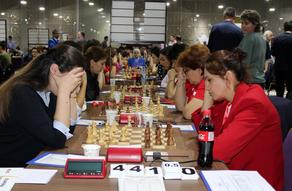 The Georgian National Team of women chess-players convincingly overplayed the Romanian rivals in the third round of European Team Championship.Mary Arabidze and Nana Dzagnidze won the matches with Romanian rivals, while Lela Javakhishvili and Bela Khotenashvili drew by stalemate.

As a result of the third round Georgian National Team accumulated 3 scores and Romanians only 1 score.