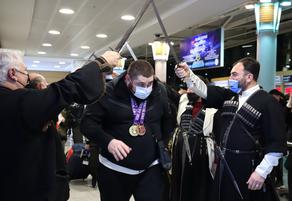 Georgian national wrestling team has returned to its homeland.

The wrestler won the world title for the fifth time. In addition, Talakhadze became the best wrestler of the competition and due to the covid, one year later, was awarded the prize of the strongest wrestler in the world.

"It is really difficult because we have to compete at maximum weight. Everything went well, and I am satisfied with what I was able to do this year," Lasha Talakhadze said.

Shota Mishvelidze won the world vice-championship with three silver medals at the World Championship in Tashkent, while Revaz Davitadze won 1 silver and one bronze medal.