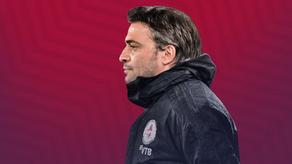 Coach Ramaz Svanidze, 39, will train the under-21 Georgian football team for the 2023 European Football Championship.