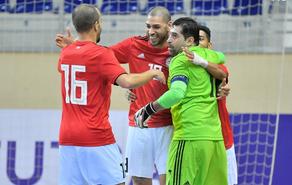 In the third Euro 2022 qualifying match, the Georgian National Futsal team has defeated Armenian team 5-0. The match was held at the Tbilisi Olympic Palace.

With its win against Armenia, the Georgian team ranked second among the four teams in the group.

On 10 March, Georgia will again play against Armenia.