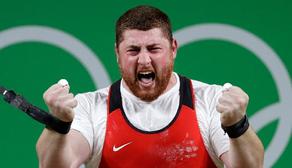 Georgian weightlifter Lasha Talakhadze has won the world record. He lifted 222 kg at the European Championship underway in Russia.