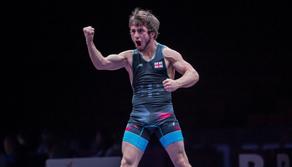 The Georgian freestyle wrestling team won nine out of ten medals in Nice, at the French Grand Prix.