Ibrahimovic to star in a famous comedy film 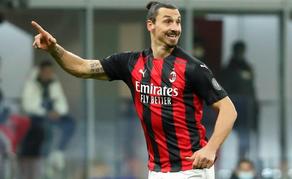 Milan and Sweden striker Zlatan Ibrahimović will appear on the big screen. He will star in a new screen adaptation of the famous comedy, "Asterix and Obelix," Dild.de reports.

The 39-year-old footballer posted the word "antivirus" on the social network, his character's name. The football player will play the role of Roman.

Filming was scheduled for last year but got delayed due to a pandemic. The budget of the film reaches 60 million euros.