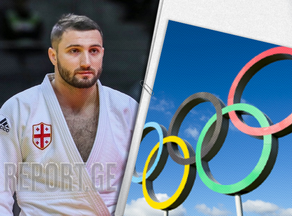 Legendary Georgian judo player Varlam Liparteliani has ended his career. He released this information in his social media post, saying that his career in sports has come to an end.

In his post, Liparteliani showed gratitude to his family and fans apologizing to the latter for failing to make them happy. ''All this hurts me a lot and will haunt me for a long time. Saying everything now is impossible, but I want you to know I love you immensely,'' he wrote.

Capitan of the Georgian National Judo Team, Varlam Liparteliani, has failed to advance to the Olympic final today. In the semi-finals, Japanese judoka Aaron Wolf beat him.

Liparteliani was born on 27 February 1989. He has won silver at Olympic and World levels.

Liparteliani has a wife and two children.