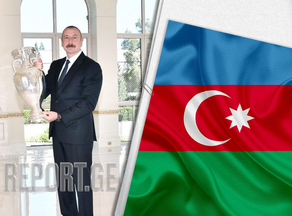 As part of the Euro 2020 Cup, to be held in Azerbaijan from June 11 to July 11, the European Championship Cup arrived in Baku.

The European Championship Cup, which will be shown in Baku on May 7-9, was handed over to President Ilham Aliyev.

The Euro 2020 Cup, also called a "Henri Delaunay Trophy," was created in honor of the first Secretary-General of UEFA, who initiated holding the European Championship. The winning team of the tournament in the final match will receive the Trophy. After Baku, the cup will be handed over to Copenhagen, the capital of Denmark.

Following the 60th anniversary of the European Championship, Euro 2020 matches will take place in different countries. Three A group matches and one match of the quarterfinals will be held at the Baku Olympic Stadium.