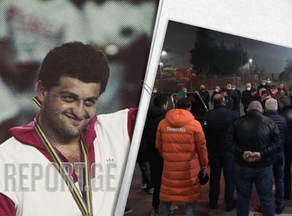 Davit Khakhaleishvili was undergoing medical rehabilitation after undergoing heart transplant surgery in one of the clinics in Minsk. He died on January 11.

Davit Khakhaleishvili was a cavalier of the Vakhtang Gorgasali II Degree and Order of Honor.

He received the Presidential Order of Excellence in 2018, as well as the Order of the Georgian National Olympic Committee in 2003.