Messi is not for sale - Spanish media 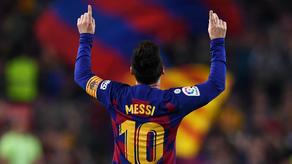 ''Leo Messi had one of the most considerable disgust of his career, a mental breakdown that led him to rethink everything,'' Mundo Deportivo reports.

Last Thursday, he met with his new coach, Ronald Koeman, who publicly said that he wanted to see him and that he considers him 'the main figure of his sports project.'

After the meeting, they made no comments on the conversation.