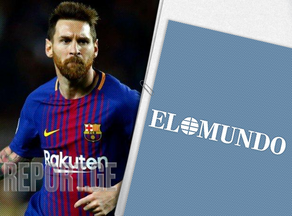 The Argentine striker, Lionel Messi, will sue El Mundo, who has published the details of his contract with FC Barcelona.

According to El Mundo, from June 30, 2017 (the date of signing the contract) until the expiration of the contract, the Catalan club will pay 555 237 619 euros to the Argentine forward, and to date, Lionel Messi has already received 511 540 545 euros from FC Barcelona.