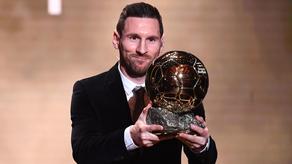 Lionel Messi has won the "Golden Ball" for the seventh time, improving his own record.

According to the relevant estimates, only the Polish striker of Bayern Munich, Robert Lewandowski, and the French striker of Real Madrid, Karim Benzema, could have challenged the dominance of the Argentine ace of Paris Saint-Germain.