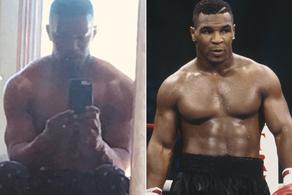 Best actor winning Jamie Foxx will star as Mike Tyson in a forthcoming film. Foxx is working hard to resemble Tyson, and his Instagram photos are proofs that his hard work is paying off.

During an interview, Foxx showed a photograph of his bulked-up physique and revealed a grueling exercise regime in preparation for the role, consisting of 60 pull-ups, 60 dips, and 100 push-ups every other day. His weight at filming, he said, would start at 216 pounds and increase to to 230 pounds.

"The technology of how I'm going to look, I guarantee you people will run up on me in the street and ask for autographs, and think that I'm Mike,"he said.