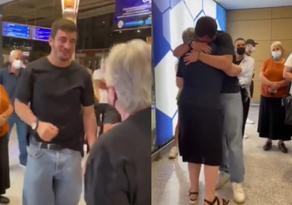 The plane of Olympic champion Lasha Bekauri's grandmother, who has been an emigrant in Greece, has landed in Georgia.

After his victory, the Olympic champion said that he planned to bring his emigrant granny and aunt back from Greece to Georgia with a million lari he received from the government.

Europetime has shared the photos and the video featuring the grandson meeting his beloved grandmother at the airport.