Rafael Nadal becomes "Gentleman of the Year" for the third time 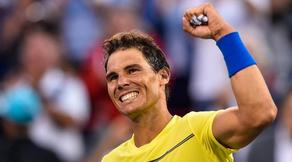 Rafael Nadal, the second tennis player in the world, received the Association of Tennis Professionals (ATP) award - "Gentleman of the Year." This award is named after the legendary Swedish tennis player Stefan Edberg.

Among the nominees were Diego Schwartzman from Argentina, Dominic Thiem from Austria, and John Millman from Australia.

The Spanish tennis player won this prize for the third time in a row.