Seville the winner of the European League 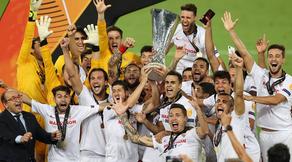 Seville outscored Inter, 3:2, in the final of the European League and earned the Cup.

Belgian forward, Romelu Lukaku, Inter, shot the first goal in the 5th minute. The Andalusian, De Jong, evened the score on the 12th minute. Jong got double on the 33rd minute, but in just 3 minutes, Godin has restored the balance.

The match was decided on the 74th minute when Romelu Lukaku hit an auto goal, and Seville became the six-time League winner.