"Thanks for the freedom!" - a symbolic gesture of weightlifters and doctors in Moscow 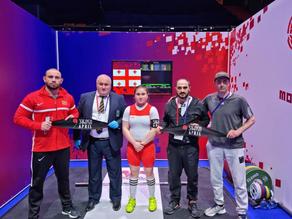 "Thank you for freedom! We remember!" Georgian wrestlers and doctors paid tribute to the memory of those who died on April 9 at the European Weightlifting Championships in Moscow with a symbolic gesture.

The winners of the European Weightlifting Championships in Moscow in the 96 kg weight category will be revealed today. Anton Plesnoy will defend the honor of the Georgian national team on April 9.

The Georgian team has one gold, four silver, and one bronze medal.