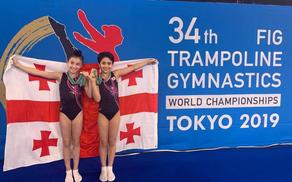 Maya Bochoridze and Ana Lapiashvili won the World Trampoline Championship Synchronized the category of 11-12-year-old. The Championship among the sportsmen of the children’s category took place in Tokyo, the capital city of Japan.

The Georgian girls scored during the qualification stage 44.710, and 44.340 – during the final stage, thus winning over the Russian and Japanese sportsmen in the final.

Rusudan Khoperia, General Secretary of the National Federation of Gymnastics, was also invited to participate in the World Championship is the status of the Judge.