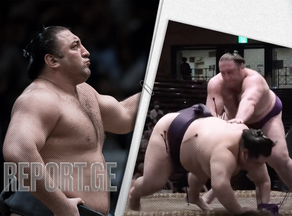 Georgian sumo wrestler Tochinoshin won for the third time at May Basho.

His opponent was the 13th Maegashira Daiamami, whom Levan Gorgadze (Tochinoshin) defeated two seconds after the collision.

Ten days later, the Georgian sumo wrestler has three wins and seven defeats which means he has to win all five remaining matches to finish Basho positively.

Levan will face the fourth Maegashira Kiribayama on May 19.