10 more victims of typhoon in Japan 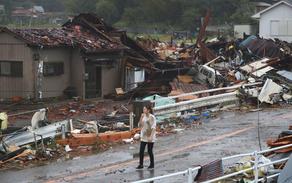 10 victims added to the death toll during the last day and night as a result of the typhoon in Japan.Three more people are in search.It is already two weeks that the typhoon continues.Evacuation is announced in the north part of the country.  283.5 mm precipitation during the last 12 hours in the central cities of Fukushima and Chiba.According to local media 4700 families are left without water in Kamogawa.

The specialists expect more landslides and flooding. The death toll since the first day of the disaster is 88 people.According to the official data seven people are in search and more than 300 are wounded.