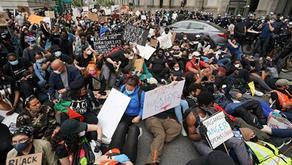 Twenty-three police officers got injuries in a collision between police and protesters in London, informs Joe Edwards, police press speaker.

“Twenty-three officers have received injuries, doing their job, policing protest over the last few days, and that is totally unacceptable.” – said Joe Edwards. He also mentioned that ten police officers remain in hospital.

Thousand of people participate in the London anti-racism protest. The protesters marched by the Embassy of the United States in the capital of Great Britain.

The Black Lives Matter protest was triggered after the Minneapolis police killed Afro-American, George Floyd, 46, by excessive force usedon May 25.