250 000 protest against the government in Prague 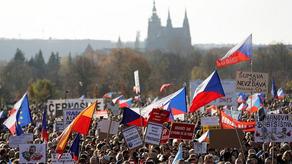 250 000 people came out to protest against the Prime Minister and the President in the streets of Czech capital, Prague. The citizens blame the government in non-democratic management. It is the biggest act of protest since the velvet revolution of 1989. The protestors demand that the Prime Minister, Andrea Babish either gives up the agricultural fertilizers business or resigns by the end of the year. According to the protestors it is pure conflict of interests.

Based on the statement made by Andrea Babish, all problems are resolved as he had transferred the ownership to the Trust Fund.

Babis dismissed the accusation in fraud with the help of law-enforcers in 2019.