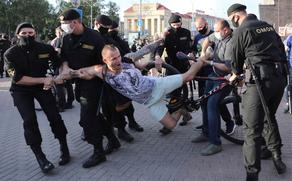 Around 270 people are arrested for organizing the pre-election picketing in several cities of Belorussia, reports the Internal Ministry of the country.

According to the information, the protest act participants are arrested for insubordination to authorities and violation of social distancing regulation.

Reminder: Victor Babariko, the presidential candidate, is charged with the case related to Belgazprombank, writes Russian media, based on the politician's defender, Dimitry Laevsky. No information is available about the article the politician is charged. Presidential elections in Belorussia are planned for August 9. Six candidates, including the current President and arrested Victor Babariko, will participate in the elections.