3 officers hurt in an explosion in Wichita, US 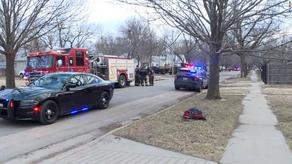 Three Wichita, Kansas, police officers were injured in a possible explosion Saturday while responding to a call at a vacant home, CNN reports.

"Just after 4:00 officers were dispatched to check a vacant residence in the area. After making entry into the residence, three officers sustained injuries from a possible explosion from an unknown device," the Wichita Police Department said in a tweet.

Officials say they're not sure what caused the explosion in the home on the 1400 block of South St. Francis. The bomb squad and SWAT team were on the scene of what police described as an "active situation."

"SWAT team and negotiators are still on scene attempting negotiations. The situation is contained," police tweeted in an update.

WPD is currently investigating an incident in the 1400 block of S St. Francis. SWAT has been activated. Please avoid the area. #wichitapolice