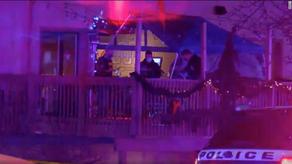 Three people were killed and three wounded in a shooting on Saturday at a bowling alley in Rockford, Illinois, and a suspect is in custody, CNN reports.

As CNN says, Rockford police later tweeted that a "suspect is in custody."

The victims were taken to a local hospital for treatment.

UPDATE: Suspect is in custody. This is an active and ongoing investigation. If you have any further information, please contact us at 815-966-2900 or Crime Stoppers anonymously at 815-963-7867.