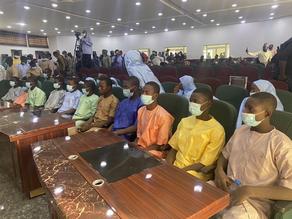 More than 300 schoolgirls, previously abducted in the northwestern Nigerian state of Zamfara, were released on Sunday, local media say.

All 317 girls have returned home.

On February 26, shooters attacked a school in the northwestern Nigerian state of Zamfara and abducted 317 female students.

The attack on a girls' boarding school in the city of Jangebe occured at night.