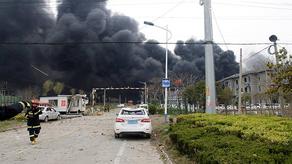 Five people were killed due to inhaling toxic gases after an accident occurred at a chemical fiber plant in the city of Jilin, northeast China's Jilin Province late Saturday, Xinhua reports.

Eight others were injured and are in stable condition at the hospital, according to the city's emergency management department.

The accident occurred at around 9:30 p.m. Saturday when the high-voltage cable was short-circuited during production, leading to a power off and causing some exhaust equipment to stop running.

The power supply restored at around 11:10 p.m. and the workers inhaled toxic gases while preparing to resume production. They were immediately rushed to the hospital and five were later confirmed dead.

Investigation into the cause of the accident continues.