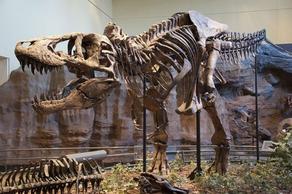 A 67-million-year-old tyrannosaurus skeleton was sold at record prices at Christie's auction. The new owner paid $ 31 847 500 for Tyrannosaurus named Stan.

The multimillion-dollar relic is one of the best-preserved specimens of dinosaurs. The skeleton consists of 188 bones, and the length of its teeth is 27 centimeters. The skeleton Stan was discovered in the United States, South Dakota, by amateur paleontologist Stan Sacrison.