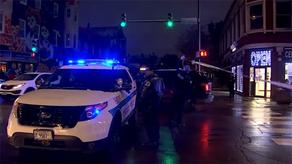 A 7-year-old girl was wounded on a Halloween night in Chicago, USA. A 31-year-old man was also wounded. The accident happened in the western part of Chicago.

Three armed youths opened fire on a street where children were collecting candy. Police say the criminals, who were targeting a man on the street of a child-friendly area, wounded a 7-year-old girl in the throat. The condition of the injured child is critical. Video of the incident was released by NBC Chicago.