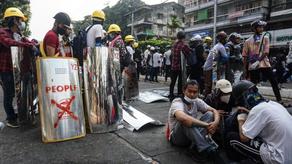 At least eight people were killed in Myanmar on Saturday as security forces opened fire on protesters, including those who continue to defy a nighttime curfew to demonstrate against last month's coup, Bangkok Post reports.

Three men died in Yangon's outskirts early Saturday morning, while another three protesters were killed in Mandalay later in the day, local media reports said, adding that all died from gunshot wounds.

Two people in Yangon were shot when security forces opened fire to disperse groups of people in Thaketa township, demanding the release of protesters who had been beaten, arrested, and taken into custody. According to local reports, the third was killed in Hlaing township, where shots were fired at groups of people who confronted the police and soldiers conducting nighttime raids at targeted households in the neighborhood.

In Mandalay, two men and a woman were killed when security forces reportedly used live ammunition and cracked down on protesters staging a sit-in demonstration Saturday morning. One person was killed in Pyay, about 140 kilometers south of the capital Nay Pyi Taw, and another in Chauk, in north-central Myanmar.