A man to seize hostages in a Moscow bank VIDEO - update 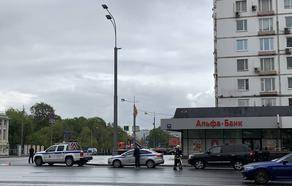 At least five people were taken as hostages by a man in one of the Moscow banks, informs Russian media.

According to the information, the accused carries a yellow bag with an explosive appliance. The man demands a considerable sum of money from the bank administration in exchange for the hostages.

“The criminal is in a difficult situation. He needs a big sum of money from the Alfa Bank administration. According to the preliminary data, he works as a courier” – told a representative of Ambulance to media representatives.

At this moment, the person who took hostages in one of the Moscow banks is already arrested.

Six persons were in the bank during the special operation. Nobody is hurt.