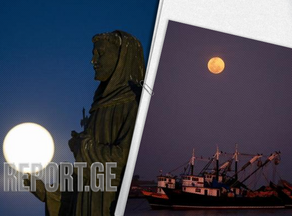 On the night of April 26-27, we had the opportunity to watch Pink supermoon, NASA Science reveals.

A supermoon is when the full Moon coincides with the Moon's closest location to the Earth in its elliptical orbit. As a result, the Moon appears much larger in size.

The April supermoon was the first in 2021 (the next supermoon will be seen on May 26). The Moon will be full for the next three days, and on April 29, Mercury will also appear in the northwest.

Although the event is called the Pink supermoon, it does not look pink at all. As NASA scientists explain, this supermoon is called pink because pink phlox blooms in the US. It is noteworthy that the event has another name. In the past, some tribes that lived on the coast called it the Moon of Fish because the American Shad spawns at the same time.