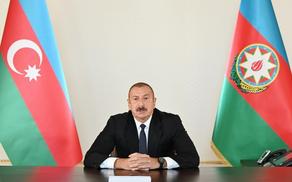 President of the Republic of Azerbaijan, Supreme Commander-in-Chief of the Armed Forces Ilham Aliyev addressed the public regarding the recent clashes on the Armenian-Azerbaijani border, local media say.

In his words, Armenia has a problematic social-economic situation, and the country's authorities are trying to redirect the population's attention, creating an image of an enemy from Azerbaijan.

"What was the goal of Armenia in committing this provocation? First, their plans include occupying Azerbaijani lands, and they do not hide this. Their military-political leadership attempted to threaten Azerbaijan with a new series of occupations. Another reason is to divert the country's population's attention from severe social and economic problems in Armenia and create an enemy from Azerbaijan. Another reason is that Armenia is trying in every possible way to disrupt the negotiation process, and I can say that it has achieved this. It is due to Armenia's hypocritical, unconstructive, and deceitful policy that the negotiations have stopped," Ilham Aliyev said.