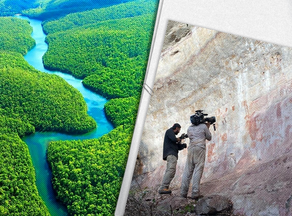 Colombian and British archaeologists have discovered a unique stone wall in the Amazon jungle. The Guardian writes about the finding.

The stone wall of natural origin, which is more than 15 kilometers long, has amazingly preserved great artistic quality paintings. Scientists have called the discovery the Sistine Chapel of ancient humanity.

Archaeologists estimate that the paintings are about 12.5 thousand years old. They depict animals that are now extinct, such as the mastodon, a prehistoric relative of the elephant that became extinct in South America at least 12 000 years ago.

The wall also features a palaeolama - an extinct camel, as well as giant sloths, horses, fish, lizards, and birds of an Ice age. The images include dancing people, as well as a separate silhouette with a bird-shaped mask.

According to archaeologists, the study of the ancient Sistine Chapel will take decades.