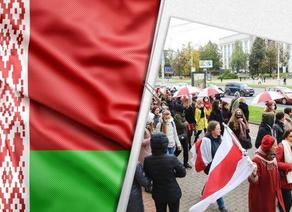 Belarus, a country of 9.5 million that Russia sees as a security buffer against NATO, has been rocked by mass protests since an Aug. 9 presidential election which Lukashenko said he won. His opponents claim the vote was rigged and want him to quit.

Most protesters marched in remote residential areas of the capital, clapping hands, shouting “long live Belarus” and waving white flags with a red stripe in the middle, a symbol of the opposition.