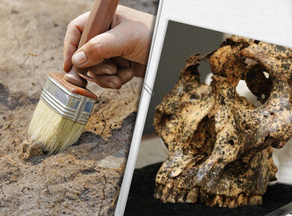 Australian archaeologists have made another unique discovery in South Africa. They discovered a 2-million-year-old skull of a distant relative of human ancestors - Paranthropus robustus (one of the extinct hominid species). According to researchers at La Trobe University, the discovery is the oldest and one of the best-preserved specimens of extinct hominids (the most highly developed family of human-like apes, including modern humans).

According to experts, Homo erectus ("upright man" - a species of prehistoric man) with a large brain and small teeth, and Paranthropus robustus, with a small brain and large teeth, lived in the same period.

The skull is almost entirely preserved. It was found in the deep caves of South Africa, near Johannesburg. The discovery study will give scientists new information about human microevolution. They think that the discovery may make a significant difference in the way people think about evolution.