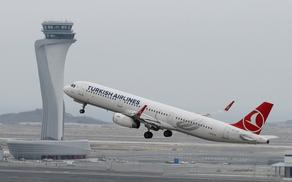 Armenia has opened its airspace for Azerbaijan and Turkey, foreign media say.

Reportedly, Azerbaijan’s and Turkey’s aviation activity will resume inside the Armenian airspace.

As Avia.pro reports, after the Armenian airspace opened, the first Turkish Airlines flight arrived in Istanbul from Baku via Armenia.