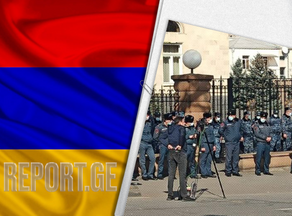 An opposition rally is underway near the building of the Armenian Parliament in Yerevan.

Law enforcement officers are on the spot, but the situation is peaceful.

Later, the protesters will move to the residence of President Armen Sargsyan.

The General Staff of the Armed Forces of Armenia says that the government cannot make right decisions during the crisis.

Armenian President Armen Sargsyan did not sign a decree on dismissing the Chief of the General Staff of the Armenian Armed Forces Onik Gasparyan. The head of the Armenian government addressed the country's president with this request for the second time.