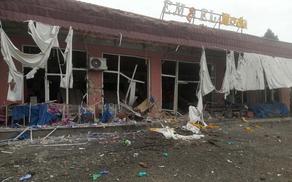 "Armenian armed forces continue to shell the city of Tartar," the population of the district informed the Azerbaijani media.

On September 30, at about 11 o'clock, one of the enemy's artillery shells hit a clothing store in the Duyerli village of the Tartar region.

A clothing store belonging to a resident of the district Emin Ahmadov was damaged.