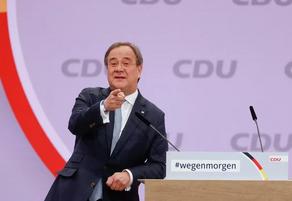 He was elected in a runoff against arch-conservative Friedrich Merz by 521 votes to 466, to resolve a three-way contest featured outside Norbert Röttgen.

Among the three candidates, Laschet, who since 2017 has been the premier of Germany's most populous state North Rhine-Westphalia, is the one who stands most strongly for a continuation of Angela Merkel's course and a "CDU of the center."

In his victory speech, Laschet vowed do everything so that the party would do well in upcoming regional elections and keep hold of Chancellor's position. "Further, more important elections are still ahead of us," he said.

He also thanked and praised the other candidates for a "fair" competition.