Azerbaijan: 5 members of same family killed in shelling by Armenia 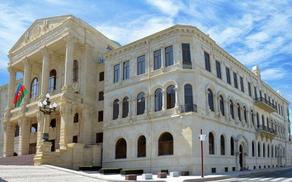 Following the General Prosecutor's Office of the Republic of Azerbaijan, as a result of Azerbaijan's shelling's civilian population by the armed units of Armenia, five members of one family who lived in the village of Gashalty, Naftalan region, were killed, Azerbaijani media say.