Azerbaijan calls on countries not to allow ethnic Armenians in Karabakh

Azerbaijan calls on countries not to allow ethnic Armenians in 5 October, 2020  13:24 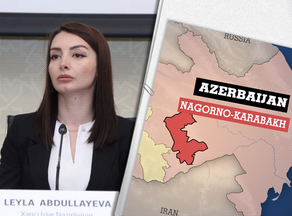 Azerbaijan calls on all countries worldwide to prevent attempts by ethnic Armenians to enter the Nagorno-Karabakh hostilities zone. The statement came from the head of the press service of the Ministry of Foreign Affairs of Azerbaijan, Leyla Abdullayeva.

Abdullayeva also commented on the safety of journalists.

"Azerbaijan is not responsible for the lives of journalists who found themselves in a war zone without the permission of official Baku," she said.

According to the head of the press service of the Ministry of Foreign Affairs of Azerbaijan, starting from September 27, 24 civilians were killed, 121 wounded, and more than 300 civilian and infrastructure facilities destroyed as a result of the Armenian hostilities in the Nagorno-Karabakh conflict zone.